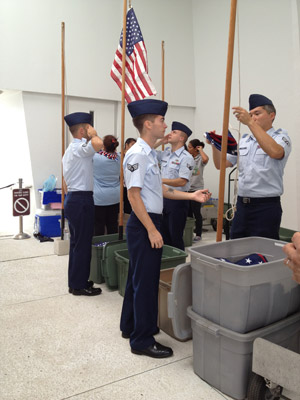 We awoke early to take a return trip to go back to Pearl Harbor. We knew that we’d have to get there early in order to be able to take the tour of the Arizona Memorial. When we arrived, it looked like everyone else thought they better arrive early. Michael parked the car while the rest of us got in line. When we got to the ticket counter, we were lucky enough to get an 8:30 tour. We walked across the bridge, over the oil slicked water, and into the memorial. We passed soldiers raising and saluting flags and then folding them. One for every soldier whose life was lost on that ship. Apparently this only happens on Independence Day.  We then went to the wall where the names of those who lost their lives were listed. It was very emotional. Even now as I write this I’m getting a little teary eyed. It breaks my heart that so many have died so that I can be free. 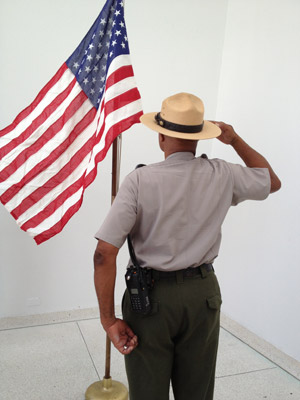 What an experience. It was very humbling to see the place where so many lives were lost and know that just below us was where many soldiers lost their lives for our country. What a way to reflect on all the freedoms we have because of people who were and are still willing to fight for our rights. And what better day for those reflections than the day that we celebrate American independence. We also had a chance to see the anchor from the USS Arizona. It was interesting to me that it was cast in the city of Chester, PA, a city not far from home, in 1911. 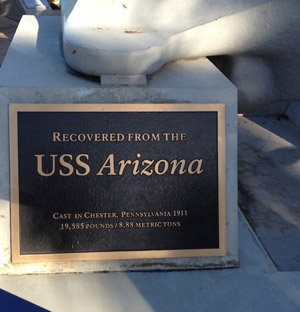 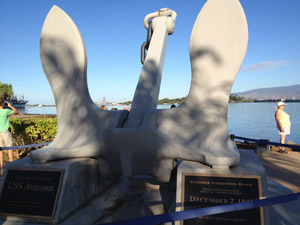 We left Pearl Harbor and went back to home to enjoy some time by the pool and the Independence Day fun that was going on in the main area. We spent time relaxing by the pool, eating grilled burgers, corn on the cob, and potato salad. Alex and Christopher also participated in the pie eating contest. I’m not allowed to post pictures, I was technically not allowed to take any but… well I have a few. Let’s just say, Alex looked like he took a bath in his pie. Christopher, though slow, was quite clean after his pie was finished.

Relaxing on lawn chairs while waiting for the fireworks to start and then watching those fireworks, was a great way to end our day.