Off to the North Shore of the Island

We were up early Wednesday morning for a drive to the north shore to meet up with a surfing instructor for Amanda and Christopher. Alex, who had some instruction on surfing from friends when he went surfing in California, wasn’t feeling well. We had a pretty drive and met up with Bobby from Uncle Brian’s Surf school. Bobby got bright yellow shirts for his 2 students, viewed the waves where we were and then told us to follow him to another location. We drove a few miles away to a pretty little beach with some nice looking waves. Bobby got the surfboards set up on the beach and gave his students some instructions on how to get up on the boards. 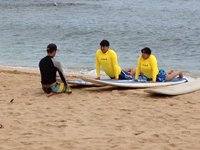 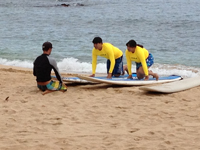 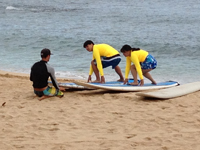 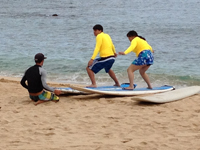 After their on the beach instruction it was off to catch some waves. There were a few falls, and some amazing rides. They did great. It was so fun to watch them.

When the surfing instruction was over we went down the road a little way to see the turtles on the beach. They were so close to us. With every wave we saw at least one turtle. Little heads stuck out of the water, turtle shells bobbing. We took a lot of pictures and enjoyed the sandy beach for a while before heading to the Dole Plantation. 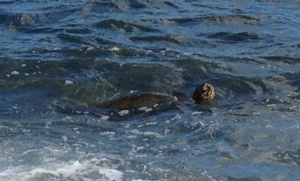 Though we went to the Dole Pineapple plantation, we didn’t spend the time in the maze, riding the train or doing the tour. The wet tired kids weren’t as interested in that as they were the pineapple ice cream. And frankly, anyone who hasn’t tried it – must. It was so fresh and so tasty. We sat outside at a shaded table and enjoyed the beautiful day along with our ice cream cones and a shared pineapple cheesecake.

From there it was back home to shower, change and have some lunch before heading to Diamond Head so the boys could take a hike.

Amanda and I were not in the mood to go on a hike, we were tired. So the boys headed out to hike to the summit of Diamond Head Crater. A 0.8 mile hike one way with steep stairways and switch backs. The first steep stairway has 74 concrete steps leading into the first narrow tunnel. The second set of stairways has 99 steep steps. Finally there are 52 stairs to the third level of the Fire Control Station. The brochure suggests allowing 1.5 to 2 hours for the hike. Amanda and I were parked in the shade. Our plan was to read/rest for a little while and then walk around the area. You can imagine our surprise when the boys came jogging down the last part of the trail after a mere 45 minutes. And yes, before you ask, they really just jogged down the last part. They weren’t tired or out of breath. Sweaty but happy boys. Rested but happy girls. A good afternoon for all.

Yes, we watch Hawaii Five-0. Yes we had to take a picture of places we’d seen on the show, why do you think Christopher wanted to go up Diamond Head Crater… So we headed into the city to see the King Kamehaeha (Hawaii’s first king) statue in front of Aliiolani Hale – home of the Hawaii State Supreme Court and across from Iolani Palace. We took a few pictures, walked around for a while and had some slow going trying to get out of the city during rush hour.  By the time we were back in Ko’ Olina we were tired and ready to relax for the evening. So that’s just what we did. 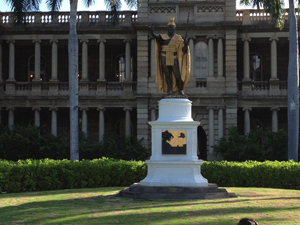