Tonight was going to be a good night to relax and regroup.  Things can change like lightning.

I drove home from work this evening heading toward sunny skies.  As I got nearer my destination, the skies started to darken and lightning flashed in the distance.  It was a beautiful sight, all that flashing light in the darkening sky.  As I got closer, the weather picked up intensity with rain pelting the car faster and faster.  Soon I was slowing down with traffic to a near crawl.  Visibility was poor and the roads were like being in a river.  Cars were stopped under overpasses as dime sized hail bounced off the car with a pinging that sounded more like bbs hitting the metal.

It wasn’t too long until I was through the storm and back into sunny skies.  Those sunny skies didn’t last long.  I barely made it home before the beginning of the storm started again.

In the kitchen we were making dinner as the storm lashed out it’s fury. The wind was blowing sideways and lightning was flashing. In the blink of an eye, half our tree was gone.

The tree was part of our lives.  It survived 12 years with our family giving us shade, blooming in the Spring and providing a great view from the kitchen window. Now are view is not as pretty.

In a flash, it all changed.

The tree covered half of the road.  Traffic was blocked and there were branches everywhere.  And so the work begun.

Mike pulled out a chainsaw.  After a few slices, the chainsaw died. Next came the handsaw followed by a series of handsaws until one by one the blades dulled. As Mike went in a hopeful search of a replacement blade, Christopher and I dragged branch after branch into a pile in the back yard. On one trip back to the mess in the road, we saw a jeep stop and a stranger with a chainsaw came to our rescue.  His name is Ben.  He said, “As I was jogging by, I noticed you trying to cut up the tree with a handsaw.  I have a chainsaw, would you like some help?”

Wow, a stranger willing to help someone he didn’t know.  Those kind of people are few and far between.  Pretty soon, neighbors came out of their houses and helped take down the tree. 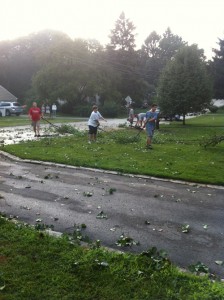 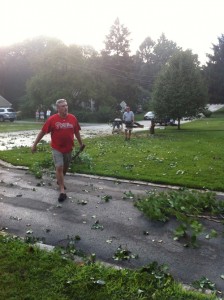 Soon the work was done and all that is left is a huge pile of branches filling up the yard, and a reminder that on August 1, 2011 a Summer storm struck our tree and brought out good neighbors and a new friend with a chainsaw.

We are thankful for good neighbors and a stranger (now friend) with a chainsaw.