We boarded a plane in Philadelphia and headed to Paris.  We sat next to a couple, Rich and Kristen, who were on their way to Portugal and were trying to learn the language on the way.  They had been to Paris before and were quick to point out that we should plan to eat as many pastries and baguettes as we could since they would never taste the same in the states as they would in Paris.  What good advice! 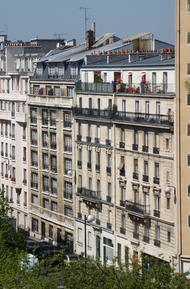 We landed in Paris, later than expected but still with enough time left in the day to get a feel for the city.  We checked into our hotel and I, of course, took pictures of the cool buildings that we could see from our window.  There is a beauty to these buildings with their rod iron balconies and flowerboxes.  There are trees growing on balconies and roofs and greenery in places you wouldn’t normally expect.

We could see the Eiffel Tower  – Tour Eiffel – from the street outside our hotel.  Mike thought that it looked close so we should just take a walk and see it.  About 3 miles later after passing UNESCO and numerous other buildings, we were able to see the Eiffel Tower up close. The day was beautiful and sunny with a slight breeze.  It was such a nice day that many people were sunning or having picnics on blankets in the grass by the tower.  What an amazing structure the tower is.  When I looked up at the detail on the arches it made me realize how much you don’t actually see when you are far away.  We walked around the opposite side from where we came in so that we could take a picture (or several) from up higher.  This was when we got our first taste of street vendors.  They would attempt to stop us every few feet trying to sell miniature towers on key chains.   By about the 8th or 9th person, I stopped feeling sorry about saying “No.”  One enterprising vendor laid his selection on the steps of the Ecole Militaire building we were taking pictures from. 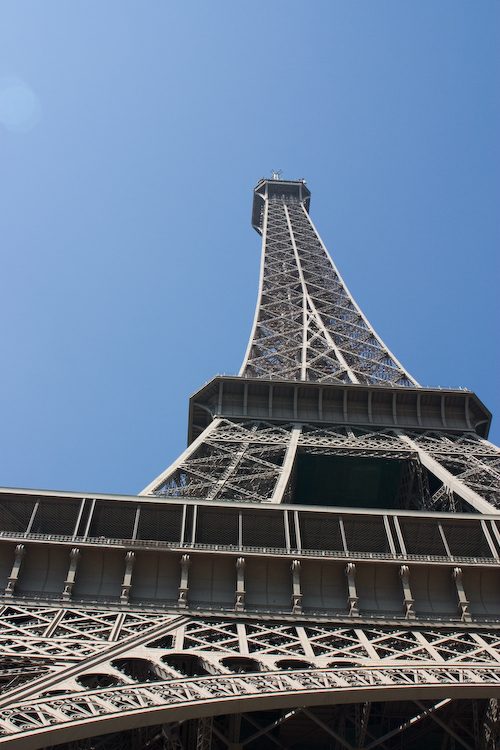 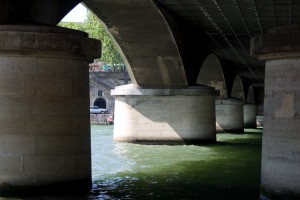 It was difficult to get a feel for the city from our location so we decided to take a boat tour on the Seine.  My Dad suggested the Bateaux Mouche tour.  We saw the boat we wanted touring down the river and Mike was convinced that if he just followed it on foot then he would know where it left from so we could go find it.  I wasn’t about to follow a boat the length of the Seine so I took a break and sat on some steps under a bridge by the river.  By this time of day, the weather had gotten quite a bit hotter than I was comfortable with so I was happy to enjoy the breeze by the river while watching the ducks.   After a little while, Mike returned with the exciting news that the boat had turned around and if we hurry, we could follow it.  So armed with our map and good intentions, we set out to find it.  Did I mention that Mike had the map and neither of us had noticed that the name and location of the boat dock was printed on it?  By the time the boat got a head of us a ways, we discovered where we should go and were only what looked like 2 blocks away (yeah, the blocks aren’t really blocks – more 1/2 miles blocks).  What a relief to find the boat, buy the tickets (thankfully they took Visa as we still hadn’t been able to get cash out) and sit down.  We sat at the top of the boat and as it started up we were able to feel the breeze and view various parts of the city at a glance.  Truthfully, I was so exhausted at this point – keep in mind, we had been up almost 24 hours except for the little sleep we were able to get on the plane.  I started to drift off every time they would translate the site we were seeing in another language.  I would wake up when the English started but would drift again as they went through the other languages.  At the end of the boat tour, we decided to stop for a quick bite to eat before trying to find our way back to the hotel for the night.  We found a cute little outdoor café and ate dinner followed by a to-die-for crème brulee.  We were only a few blocks (a mile) away from the Arc de Triomphe so we took a walk to view this amazing structure.  On the way we passed a wall that was a huge advertisement for an espresso bar and it was made up to look like a zipper.  Of course I had to take a picture.  I ran out into the middle of the street to take pictures of the Arc and was able to get three before my camera battery died.  We went under the road and walked over to the arch and looked around for a bit.  At this time, we didn’t go up it since my secondary battery apparently didn’t hold its charge.  We knew we’d be back but this was a good time to head back to the hotel.  I thought that this was also a good time to try the metro – no way was I walking back to the hotel with blisters all over my feet.  The man at the metro station that sold us our tickets was very helpful and told me that my French was very good.  Not sure if that means that every other American he’d seen that day was worse or if he was just trying to be nice.  He told us how to get back to Montparnasse and thankfully it was a straight ride back.  Well, actually the train was straight back but then Mike navigated us to our hotel via the scenic route.  We probably passed our hotel as we walked around in circles.  Finally we found the hotel and we were able to collapse for the night.

>>Read more about our Paris Trip.